Traditional ‘Hanfu’ Fashion Is In, but Buyer Beware

As spring arrived in April across Beijing, it wasn’t just the multitude of blooming flowers that caught the eye.

In a phenomenon that is rapidly growing in popularity over the last two years, spring now also signals nostalgia for hanfu, an umbrella term for a wide range of traditional or traditionally inspired Chinese clothing.

Last month, as crowds flocked to the city’s major tourist hubs, such as Yuyuantan, Daguanyuan, and the Summer Palace, scattered amid the spring blossoms were women in extravagant hanfu designs.

Their vibrant, elaborate ensembles are now often another subject for photographers to capture, along with the season’s symbolic flowers.

But it isn’t just another fad. Some companies now even allow employees to wear such elaborate outfits to work, and hanfu start-ups are popping up all across the country.

In particular, Cao County in the eastern Shandong province has not only garnered widespread attention for its burgeoning traditional attire industry; it is also home to several affiliated industries such as accessories, photography, design, as well as hair and make-up.

More knowledgeable buyers pay close attention to the finer details of their outfits for a more refined aesthetic. They buy ornamental hairpins, get their make-up done, book photographers, and take part in events and festivals.

The most ardent enthusiasts open their own stores, sign up for classes to learn hair and make-up styles, and participate in fashion shows.

Though interest in traditional attire began in China in 2003, the industry saw little growth until a few years ago, when it witnessed a sudden surge in popularity. Despite the growth, however, experts believe the industry is yet to mature, and that consumer pitfalls still abound.

Inexperienced enthusiasts buy outfits purely based on the photos sellers use online, only to receive poor quality and ill-fitting imitations.

As one insider put it, “The road hasn’t been laid flat, and there are a number of stumbling blocks.” 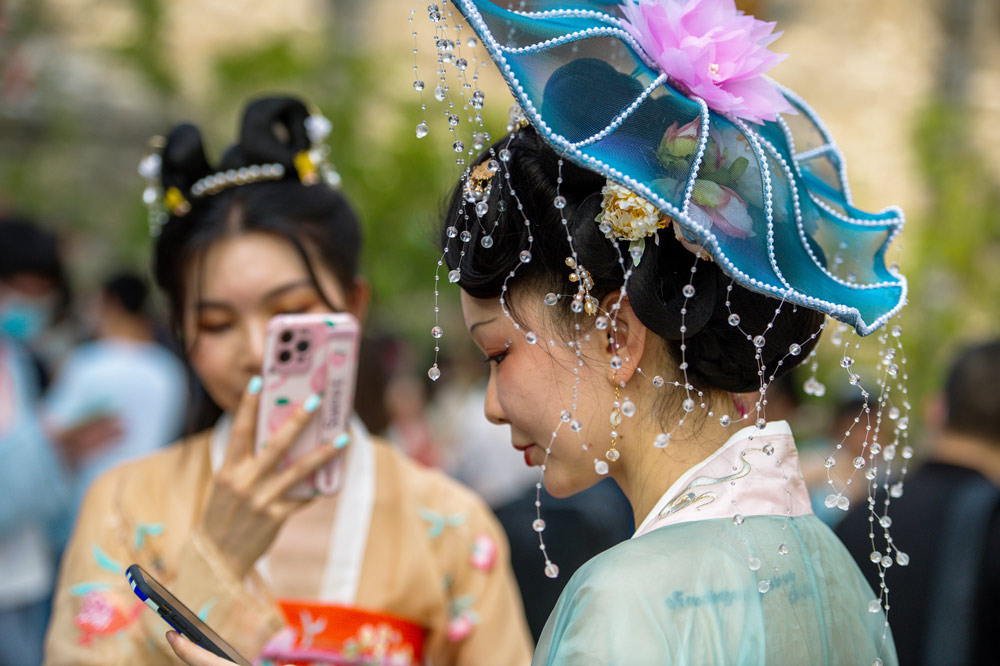 A Gen Z hanfu enthusiast, Nannan grew up watching period dramas and decided to buy the traditional outfits shortly after joining the workforce. Her first attempt did not go well.

She bought a Ming dynasty design but the fabric was slightly wrinkled. Nannan says she didn’t mind since she didn’t consider it everyday wear. It only mattered that it looked good.

But while buying hanfu, appearance isn’t everything. If they are to be worn as daily clothing, they must be functional garments.

For example, if the undergarment of a summer outfit modeled on the Song Dynasty (960-1279) is made of extremely thick, unbreathable fabric, it’ll be soaked through by the end of the day, causing its colors to fade or change over time.

Quality issues don’t end there. Given hanfu’s status as a symbol of traditional culture and fashion, more and more enthusiasts have begun to pay attention to an outfit’s authenticity, particularly the form and fit.

A 2020 report from domestic e-commerce giant Taobao showed that the Ming, Song, and Tang dynasties were the most popular subcategories amidst the hanfu range on offer. Acquiring quality goods, however, is easier said than done.

Yun Qing from Hangzhou believes that traditional designs must be corroborated through comparison with actual historical artifacts; the authenticity of anything else cannot be trusted.

Truth be told, archaeological research does not support many of the hanfu choices popular among Gen Z today.
– Yun Qing, hanfu enthusiast

“Truth be told, archaeological research does not support many of the hanfu choices popular among Gen Z today — such as Tang-style hezi (strapless undergarments) and skirts; so-called ‘Wei and Jin period’ style garments; or Song-style pants with elasticated waistbands. But companies are willing to make them because they’re attractive, convenient to wear, and popular with consumers,” says Yun.

She underscores that a buyer must first ensure that the garment’s design is true to the time — then consider the fit. This means carefully examining the sewing pattern produced by the merchant. “I won’t put money down if the merchant won’t show me a two-dimensional pattern — otherwise, the fit is bound to be flawed,” she says.

Apart from quality issues, another aspect that has hindered the market is the long production cycle for hanfu designs. An ordinary outfit costs around 300-500 yuan. It is common for small-scale online shops to sell such designs 45 days in advance and still fail to deliver the finished garment to the buyer on time.

Sometimes, an order may even take as long as one or two years to complete. And, the moment a particular design gains traction online, it strains the production capacity even more.

For example, when orders of leading online brand Lanruoting’s viral design cijian chunse (Here be Spring) were severely delayed, people joked online that they may not get their deliveries until autumn.

They, too, are bogged down by slow production cycles — it often takes several months to two years. As long-term enthusiast Yueyue explains, “Minghuatang’s wedding dresses are much sought after. If you don’t want to rent clothes for such a huge life event, then your only choice is to wait a year or two for the dress to be completed. Many people have put off their weddings just for this.”

The production cycle is longer than some people’s relationships.
– Yueyue, hanfu enthusiast

She jokes: “The production cycle is longer than some people’s relationships.”

To hedge against the long waiting period, workshops mostly only accept group purchases and wait months until orders reach a certain threshold before launching production. In such a system, however, deals break all the time.

Another issue that frustrates newbies who finally acquire hanfu is the laborious process of maintaining the outfit.

Sellers present the use of fabrics like silk as justification for their high prices but, though they are comfortable to wear, they’re also very fragile, and come with stringent washing and ironing instructions.

“I spent more time ensuring it didn’t get wrinkled than I did wearing it,” commented one buyer on social media. “Ultimately, it was either going to gather dust in my wardrobe, or I was going to have to sell it on a second-hand platform.”

Photography accounts for a significant chunk of the hanfu market. Big brands, such as Poetic Oriental Beauty, also specialize in historical costume photography. To get the most out of the experience, buyers can’t afford to be stingy about accessories, hair, and make-up.

“Good accessories are like the cherry on a sundae — few people will buy hanfu without also investing in accessories,” says Nannan. She is the proud owner of a four-storey dresser full of traditional accessories.

Using these rare items, she can transform her appearance and achieve different styles. The most expensive ornament in her collection is a 200-yuan hairpin like something out of the novel “Dream of the Red Chamber,” which pairs particularly well with Ming Dynasty hanfu.

Accessory vendors, however, are few and far between, with the vast majority comprising small family workshops. Most items can be reproduced by part-time zanniang, or hairpin artisans — for around 100 yuan each.

Meanwhile, hair accessories that are made using complex techniques that are recognized as forms of intangible cultural heritage — such as ronghua (“velvet flowers”) or chanhua (“wrapped flowers”) — require more time and are therefore more expensive.

A major brand of hanfu head ornaments, Wanbaode, sells wedding crowns for 200,000 yuan, and hairpins for over 1,000 yuan.

Rather than buying finished products, Yueyue often prefers DIY kits. For each type of accessory, she makes two at a time. “Just a single delicate flower is very difficult to make. It took me all of four months to learn how to make a ronghua hairpin.”

To better understand the hair and make-up styles of different dynasties, Yueyue spent thousands of yuan on a special course in the coastal Jiangsu province, to learn two to three styles from each dynasty.

“Whether I was scammed or not is a matter of personal opinion. What I care about is the work; I wouldn’t sign up for any class just because the instructor is a famous stylist,” she says.

There is no consensus on what constitutes “good” hair and make-up. Yun Qing learned the art from online tutorials. “If you wear hanfu for a while, you’re bound to pick up some skills,” she says.

She even created a separate social media account to share photos of her hanfu and document her hair and make-up creations. These photos are usually taken free-of-charge by professional photographers in a quid-pro-quo arrangement, since they get to practice their photography skills and build their portfolio.

Their IPO, through which they hoped to secure a top spot in domestic photography studios, has been pending since 2020. But, for enthusiasts who prefer a more subtle aesthetic, the work commercial studios produce is considered tacky and derivative.

And though this offset of the industry is growing at a dizzying pace, it still suffers from service quality and business model issues. Poetic Oriental Beauty has drawn criticism in recent years, which largely revolve around poor experiences during shooting, bad photoshopping, and false advertising.

Wang Han has worked in this industry for many years and previously operated his own hanfu brand. Asked about the state of the industry today, he says bluntly, “Turning a profit is no easy feat. Though it appears to be buzzing with activity, the industry’s decline has already begun.”

Analyzing market trends over the years, the development of the hanfu industry can be approximated into four stages.

First was gestation, from 2003 to 2008. Traditional fashion made a comeback, and enthusiast clubs sprung up nationwide, with the establishment of now-veteran brands such as Chonghui Hantang — its name literally translates to “revisit the Han and Tang dynasties.”

From 2008-2017, a period of sluggish development followed, during which the industry slowly gained traction, and supply chains gradually formed.

The next three years saw whirlwind growth. New brands and workshops proliferated online. As the trend continued to sweep the nation, downstream industries and investors with deep pockets started buying in.

In 2020, however, things started to change. Though a wave of new businesses emerged, just as many shut their doors. Price wars ensued, and bigger brands with investment backing solidified positions, such as Shisanyu, Chonghui Hantang, and Shi’er Guangnian. 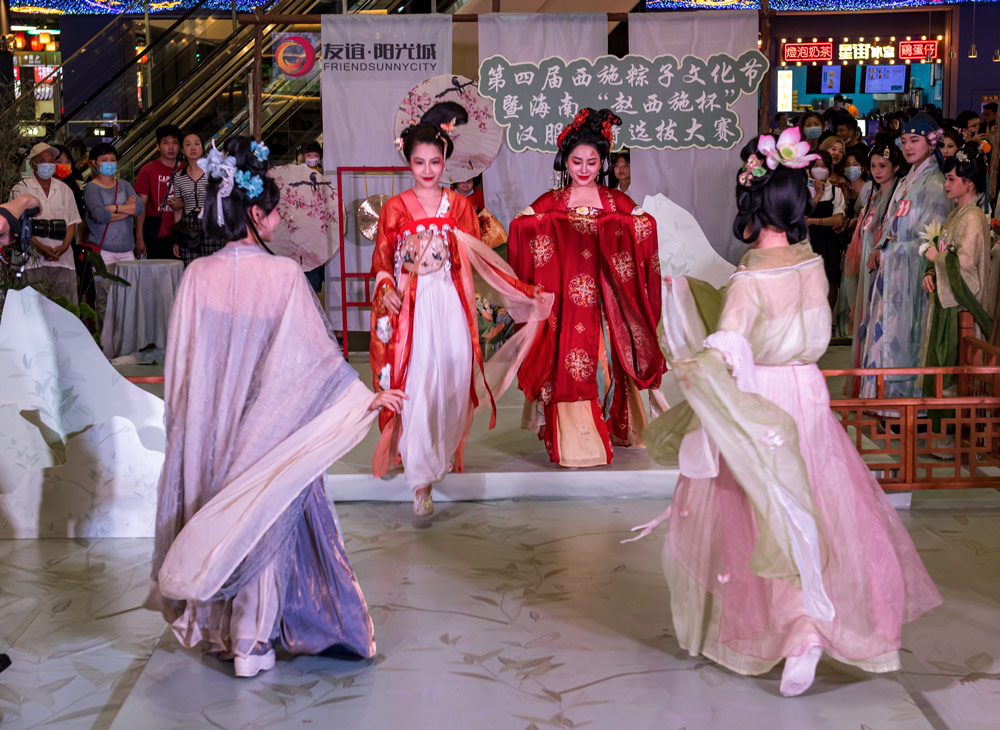 However, shoes, bags, accessories, hair and make-up are still largely manufactured in small workshops; only a few major brands have established large-scale factories. Most brands are so small that even if they are considered high-end, the only employees they can afford are the owner as the cutter, and the owner’s wife as the model.

For many, the prospects are slim at best. Founder of the famous brand Huajianxi offered a telling glimpse in a post online, which they have since deleted. “In 2021, I took on two new jobs — both of which have proved to be far more profitable than operating a hanfu store,” they wrote.

Another brand, Lanruoting, closed down last year. The company quickly built a reputation for producing viral designs, two of which — “Symbol of Peace” and “Here be Spring” — were dubbed “uniforms of the hanfu world.”

Though Lanruoting’s operations did not continue into the second half of 2021, it far surpassed its rivals in terms of sales for the whole year, coming in second in the affordable market niche. Despite the buzz, it ceased production in July last year.

According to Wang, the choices for hanfu businesses which aren’t backed by investor capital are limited. Either they build factories to bring down prices and boost production, or they opt for a high-end made-to-measure strategy, offering exclusive experiences.

The other option is to branch out and offer a wider range of casual daywear incorporating hanfu-inspired elements. This would tie in well with the rise of guochao, or “China chic.” For the moment, however, the low-end hanfu market is all but saturated.

A version of this article originally appeared in Kaiboluo Caijing. It has been translated and edited for brevity and clarity, and published with permission.

(Header image: A woman in “hanfu” clothing poses for a photo at the Palace Museum in Beijing, April 2021. VCG)